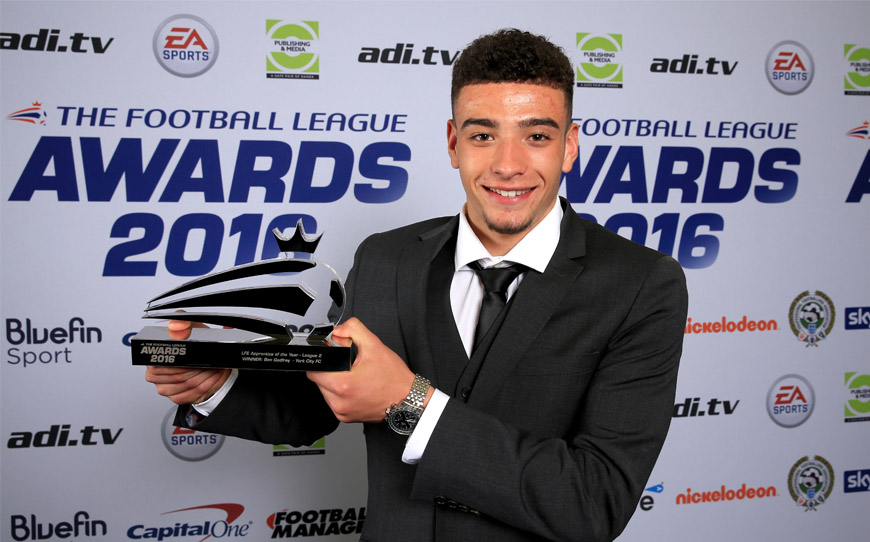 Ben Godfrey has been named the LFE Apprentice of the Year for League Two at The Football League Awards 2016.

The midfielder was recognised for his performances both on and off the pitch whilst playing for his boyhood club York City.

Godfrey, who joined Norwich City in January earlier this year, received the award at the gala ceremony at Manchester Central on Sunday evening in front of over 600 guests from clubs, sponsors and the football industry.

The Football League Awards 2016 was being hosted in Manchester for the first time, the same city in which The Football League was officially formed 128 years ago to the day. In its 11th year, the awards ceremony celebrates on and off pitch excellence across The League’s 72 clubs.

Godfrey, who made his first team debut for York last August, saw off competition from Luton Town’s Frankie Musonda and former Barnet defender Hakeem Odoffin – now at Wolverhampton Wanderers – to claim the overall LFE Apprentice of the Year for League 2 award.

He made 15 appearances in total for the Minstermen before signing for Norwich on his 18th birthday on a three-and-a-half-year contract. York received an undisclosed six-figure sum, believed to be in the region of £150,000 with add-ons that could take the final amount closer to £1m, for the midfielder.

On winning the award, Godfrey said: ”It’s in my long list of proud moments this season and is a reward for all the people around me that have put in a lot of hard work, at both Norwich and York City.”

The award recognises outstanding apprentice players at League Two clubs who excel both on and off the pitch.