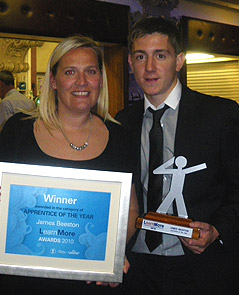 The 18 year old was among dozens of high achievers from across North Staffordshire to be honoured at the LearnMore Awards at the Civic Centre, in Stoke.

James, who was nominated by LFE for the Apprentice of the Year category, said:

“I’m really pleased to have won the award and very surprised. I was flattered when LFE said they wanted to nominate me and couldn’t quite believe it when my name was read out!”

The LearnMore Awards were organised by Stoke on Trent City Council and the North Staffordshire Regeneration Partnership as part of Adult Learners’ Week.

They were set up to reward individuals who have displayed commitment to learning and who have become an inspiration to their peers and colleagues.