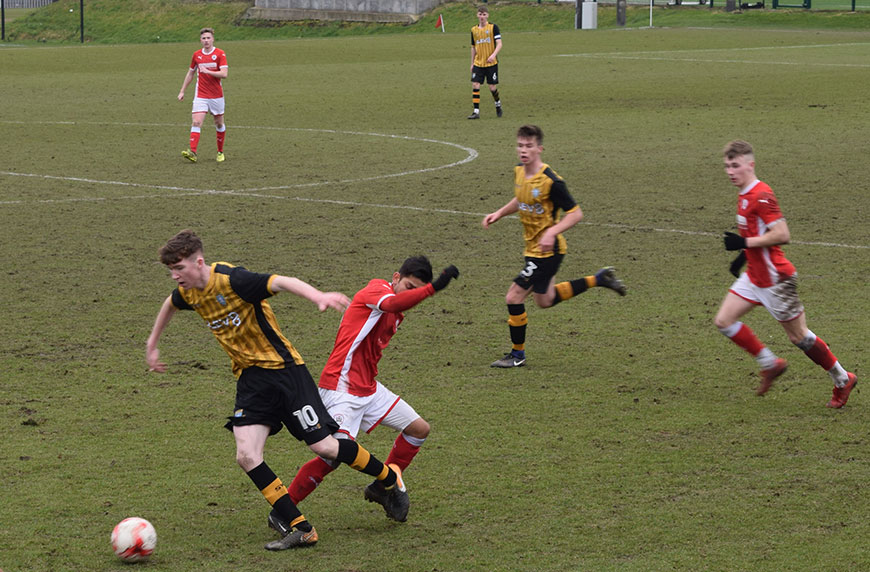 By Joe Harris: Ciaran Brennan netted a stoppage time winner for Sheffield Wednesday Under-18s in a 2-1 victory over Barnsley Under-18s to rise to third in the Professional Development League North table.

The Owls captain had initially opened the scoring in the first half before trialist Josh Hesson restored parity for the hosts, while Brennan’s second in the dying moments extended Wednesday’s winning streak in 2018 to five games.

The visitors have experienced contrasting fortunes since the turn of the year having suffered four losses in succession heading into the fixture and were up against it early on when a lofted free-kick reached the unmarked Jordan Lonchar, who unselfishly diverted the ball back across goal for Brennan to nod home from close range.

Barnsley were almost swiftly back on terms after Brad Lynch latched onto a clearance down the right-hand side, but his volley cannoned back off the upright and away to safety.

Lynch was denied again towards the end of the first half as his curling free-kick was excellently saved by Owls keeper Arijus Brazinskas.

Sixteen-year-old winger Iyad Hamud came close to doubling the margin after seeing his header saved before the scores were tied on the stroke of half-time through Hesson, who picked up the ball on the edge of the area and perfectly placed an effort into the top corner.

The game turned into a cagey affair after the restart, with neither side truly testing the two keepers. However, with the game heading towards a stalemate, Wednesday substitute Preslav Borukov flicked on Alex Hunt’s set-piece before Brennan reacted quickest to slam the ball into the net to snatch the points.

Wednesday PDP coach Ben Wilkinson told LFE: “To be honest, in the end it could have gone either way, it certainly was not our best performance. We have been playing brilliant football of late and that has reflected in our results.

“We knew it would be tough coming here today, so overall we are happy. We’ve got three points today and in the circumstances with the weather on a tricky pitch the boys have done well.”

Meanwhile, Tykes Under-18s coach Tom Harban said: “It could have gone either way. It was a difficult pitch and on another day we could have come away with the points. But we haven’t, we just switched off in the final minute.”