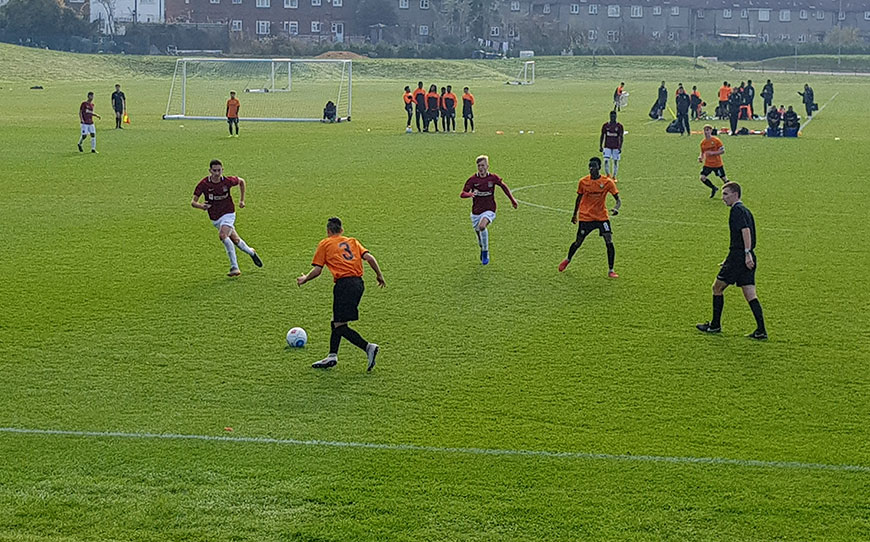 By Sandy Beeson: Scott Pollock was the hat-trick hero as Northampton Town Under-18s continued their unbeaten start to the season with a win against a spirited Barnet Under-18s at The Hive London.

The win was all the more impressive given visitors were without captain Jay Williams, who was called up by first-team manager Keith Curle as a substitute for their defeat away at Milton Keynes Dons.

The commanding defender’s absence was noticeable when they conceded the first goal 19 minutes in. Vasiliou did well to find space on the left before whipping a cross to the back post that was headed across goal by Murphy beyond Northampton goalkeeper Bradley Lashley.

The young Cobblers took just three minutes to get back on terms, however, when Michael Harding was chopped down just outside the penalty area by Barnet’s Moses Omrore. Pollock’s free-kick took a deflection off the wall, wrong-footing Barnet keeper Aymen Azaze.

Barnet made the perfect start to the second half when they were awarded a penalty in the 48th minute. A driving run from Rio Connell was ended when he was scythed down by Matthew Sunn and Vasiliou stepped up to bury the spot kick.

The Bees youngsters were unable to hold on though as Northampton levelled almost instantly for a second time when Morgan Roberts was hauled down in the area, giving the referee no choice but to award another penalty. Pollock confidently lashed the ball into the top left corner to restore parity.

And the win was sealed 20 minutes from time after a third penalty of the match was awarded to the away side after Sunn was wrestled to the ground from a corner. In-form midfielder Pollock added another to his tally as he went low to the right to give the Cobblers the lead for the first time in the game.

After his team comfortably held on for the win, Northampton Lead PDP coach Jon Brady praised their ability to come from behind and hailed their run of form this year, which has seen them win nine and draw two to command a six-point lead.

“We’re a funny old side,” Brady told LFE. “Sometimes we need to go one goal down, then it jolts us and we start stepping on the gas.

“I’m pleased for the boys because we’re undefeated since February. They want to win games of football and they’ve proven they can do that consistently for a long period of time.”

Barnet’s Lead PDP coach Danny Senda was disappointed with the manner of the defeat having conceded three goals from set-pieces, but assured his team would learn from losing to the league leaders.

“Give credit to Northampton, they’ve stopped our rhythm,” said Senda. “They broke us up but we’ve got to got to understand how to manage games and not be drawn into the way the opposition play.

“We talked about being calm, not just in possession but when other teams have got set plays. They’ve got to understand that they can’t panic because if they panic near the box then this can be the outcome of it.”