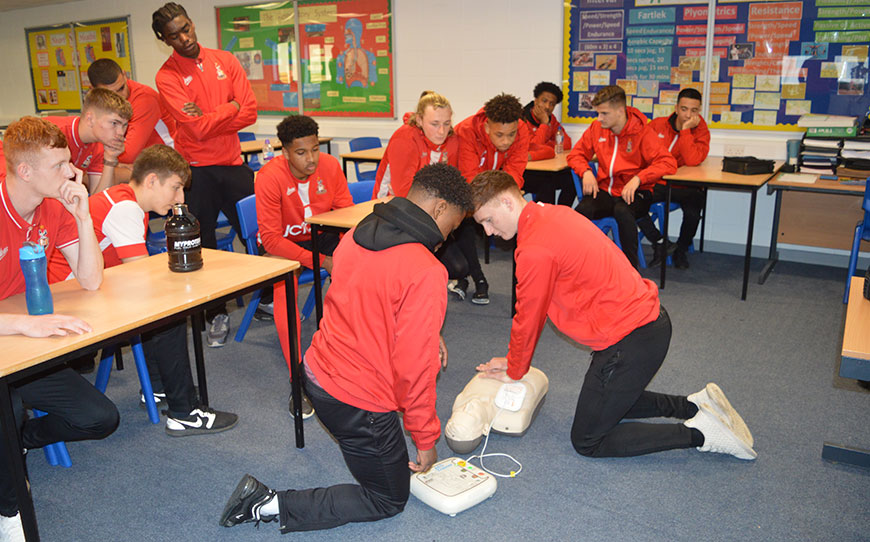 Under-18s and Under-23s players at Bradford City boosted their awareness of cardiac health during an LFE Life Skills session delivered by Tobi Alabi, founder of the Heart4More Foundation.

The former Millwall apprentice featured on the Lions’ first-team pre-season tour at the start of the second year of his apprenticeship back in July 2011 and signed a professional contract the following year before enjoying a spell in Sweden with Ljungskille SK.

Alabi soon returned to the UK to play non-league football, but his playing career was abruptly ended at the age of 19 in October 2013 after collapsing on the pitch while playing for Metropolitan Police due to a five-minute-long cardiac arrest.

Six months later, Alabi required resuscitation and had a pacemaker implanted into his chest after his heart stopped three times, leading to the diagnosis of a mild case of hypertrophic cardiomyopathy.

Since then, the 24-year-old has set up and developed his foundation into a respected charity, providing inspiring workshops to Academy players across the country.

Alabi told LFE: “The session teaches the boys about general cardiac health and football-related cardiac health, so we’re talking about identifying signs and symptoms associated with having a potential heart problem or someone that’s going into cardiac arrest.

In addition to increasing knowledge of cardiac health, Alabi uses his workshops to trigger reflection of life without football and encourages the players to remain focused on their education to give them the best chance of success once their playing days are over, whenever that may be.

“It’s my opportunity to give them a bit of advice as someone who’s been in that position and someone who can now no longer play the game of football,” he said.

“It’s just for them to hear it from an unfamiliar mouth to say that the opportunity is massive and it’s one that shouldn’t be taken for granted because whether you play for 15 years or 15 months, the career’s a short one and something has to come after it.”

First-year professional Callum Gunner reinforced Alabi’s message to work hard in the classroom alongside dedication on the pitch, in order to prepare for every eventuality.

The 19-year-old added: “The session is massively important because it can save lives, whether that be in football or on the street and I think it’s something that everyone should be made aware of.

“Listening to Tobi’s story and how much he said to treasure the moment of what we’ve got, that’s made me realise what we’ve got even more. It’s obviously unfortunate for him to have his opportunity cut short but we’re still here and we’ve got to make the most of it.

“As daunting as it is and as much as you want to focus solely on football, you’ve got to have an alternative option in place and stories like Tobi highlight how short a career can be.”

Second-year apprentice George Sykes-Kenworthy also hailed the importance of the seminar and believes he now has the invaluable tools to save a life.

The teenage goalkeeper said: “I think it was really beneficial for all the players involved. It’s something new and something a lot of us weren’t aware of, but now we’ve had the session it’s been really helpful.

“This is really important, not just for football but for life in general because if you’re out and about and see someone down on the floor and unresponsive, obviously you want to go over and help and this sort of session really is helpful to prepare for that.”

The Heart4More workshop is one of many provided by LFE’s Life Skills programme, which is now open to players from Under-9 level up to the Under-23s, covering topics like social media, addiction, sexual and mental health.

Alabi said: “I think LFE does a really good job. Ever since I was a scholar, I’ve been familiar with LFE and I also think it’s very forward-thinking to support an initiative like the foundation.

“I think the fact that LFE has introduced the tiered programme from younger age groups up to the Under-23s is of massive importance because not everybody in the schoolboy age is going to get to the youth team to be able to experience the workshops being provided.

“Having the foresight to see it’s worth investing in the schoolboys and giving them life skills is fantastic.”