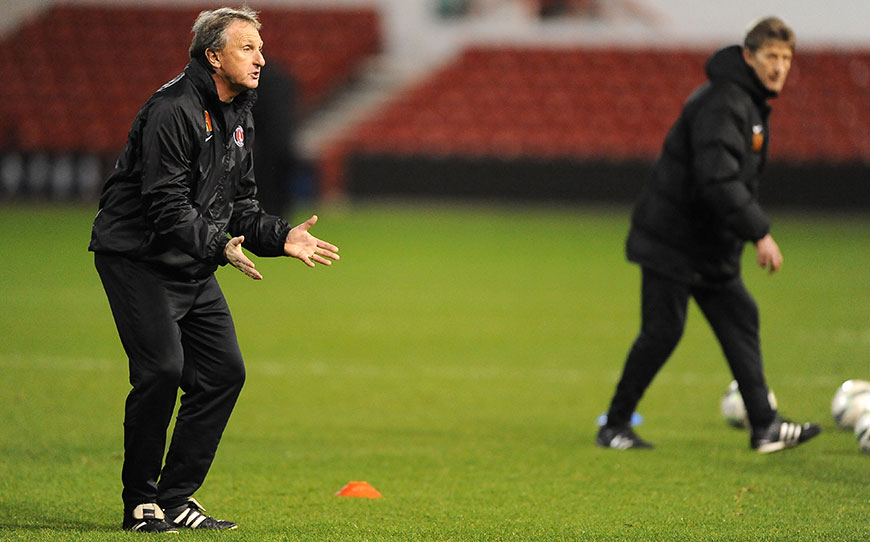 Charlton academy boss Steve Avory has told the South London Press that the club will not relax when it comes to youth development despite seeing 14 players graduate to the first-team within the past three years.

The Addicks fielded their youngest ever side in the 4-1 Capital One Cup win over Peterborough in August (with an average age of just 21 years and five months) with eleven of the squad for that game coming out of the youth system.

Jordan Cousins, still only 21, registered his 100th first-team appearance recently while the likes of Regan Charles-Cook and Karlan Ahearne-Grant are among the latest batch of players to feature at first-team level.

Yet Avory is unrelenting in his aim to keep the production line flowing.

“You can’t rest,” he told SLP. “We set ourselves targets every season – I won’t give you those – in terms of what you try and meet. How many schoolboys become scholars, scholars become pros and pros who get in the first team.”

“Every single season we’ve been reaching those and surpassing them. We’ve got photos up in the rooms of all the lads who have made their debuts. The ones that are in the Premier League now you are reminded about all the time – Joe Gomez, Jonjo Shelvey (right) and Carl Jenkinson.”“

“There are others who didn’t stay very long at Charlton, like Harry Arter at Bournemouth. He made one or two appearances with us but was someone who had to step back and go into non-league football before working his way up again. It is not a surprise to me that he is now playing where he is when you consider his technical ability.”

Key to that advancement is Avory’s determination to ensure that players at Charlton’s academy are given the skills and steel to adapt to mens’ football.

“We are big on ensuring players have the right personality that fits our needs,” said Avory.

“We want them to have a good work ethic, responsibility and self-discipline that they do want to learn.”

“We demand concentration from them in what is a structured environment. The discipline is harsh at times – we don’t make any excuses about that – but players like that and respect that. I don’t like a sloppy, casual environment.”

“A coach or teacher has to have that discipline with the group – if you haven’t got that then you won’t develop and improve. But it is also a caring environment. Getting that balance is something we strive for.”

“Your number one objective is producing players for the first team – if you don’t attain that target then you’re failing. But it does depend where a club is in the leagues. It’s clearly more difficult to get lads through to a Premier League first team. It was hard for us at one time in that respect.”

“Every manager who has come in from Alan Pardew onwards have had a belief in our young players. There are always demands on recruitment. As coaches you have to stay on your toes.”

Guy Luzon promoted Regan Charles-Cook, 18, in August (against Dagenham) and the right-back has since gained further opportunities. Irish winger Mikael Kennedy scored against Posh just three minutes into his debut.

“I went to the game and it was very satisfying,” said Avory. “Karlan was on the fringes last season, then had a bit of a reality check and stepped back. It couldn’t start any better for Mikhail but the next question is can you go on and perform for the rest of the game? He did and played the 90 minutes.”

“Regan has been a pleasant surprise to us all. He is a player who holds no fear – confident without being brash. Guy liked the look of him even last season and he has stepped up to the plate.”

While Charlton have been compensated for four players (Kasey Palmer and Charlie Colkett to Chelsea, goalkeeper Ryan Huddart to Arsenal and defender Sean McGinty, most-recently released by Rochdale, to Manchester United) who have left, none have yet played at first-team level for the team they signed for.

“Some top Premier League clubs can blow you out of the water with what they can offer players,” Avory continued. “But we’ve not done that bad in keeping our better players. A strong factor is that they can see a pathway to our first team at a younger age.”

“Diego Poyet only played half a season – 23 games – before he went to West Ham. Carl Jenkinson was nine [signing for Arsenal]. Jonjo Shelvey, to his benefit, had a full season in the Championship.”

“Top clubs are viewing our players – and other Championship and League One players – week in and week out. We can’t stop that under the current rules. They are allowed to do that. I guarantee every time we stage an U18 or U21 game there are five to ten scouts watching.”

“I haven’t got the stats to prove it but there is lots of good quality coming through in the Football League that are getting the benefit of first-team experience between the ages of 17 and 21. It is vital in maturing as a player.”

“That appears to be a problem in the Premier League. Clearly clubs in the Premier League have got quality in their ranks – you can’t say Chelsea don’t have it because they have proven success of their youth teams. But it is a different model. Players come to a certain stage and age of where do they go next?”