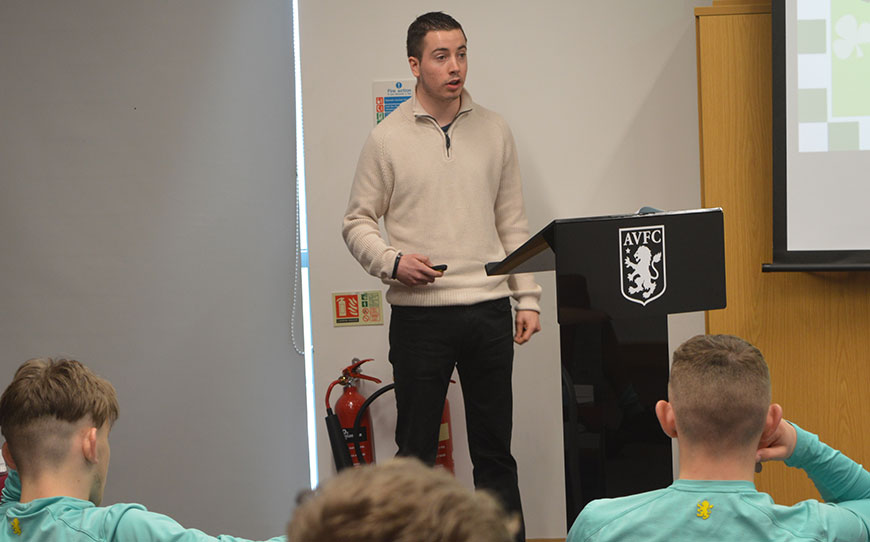 LFE’s Life Skills programme provided apprentices at Aston Villa with the opportunity to hear the incredible road to recovery of Charlie Fogarty MBE during his ‘Anything is Possible’ workshop.

The 21-year-old was a former academy player at West Bromwich Albion and Birmingham City until he suffered severe injuries after being hit by a car at the age of 15.

Fogarty was in a coma for six months before spending a further 10 months in rehab, learning to walk, talk, eat and drink again and has gone on to use his experiences to inspire apprentice players across the country.

“I try to deliver the message to never give up, but I suppose the underlying message is that anything is possible,” he told LFE. “I was very ill but I believe I’ve done well to come out of it and now I’m making big strides.

“There was a good number in this room today and if just one of them is inspired, then I will know I’ve done my job. I want to inspire everyone – millions has been my goal ever since I came out of hospital – but even just one at a time, I’ll slowly get there.”

Fogarty’s recovery has been nothing short of remarkable, defying the odds to return to playing action, representing Northern Ireland in the Cerebral Palsy World Cup last September and becoming the player-manager of the Solihull Moors Open Age Disability team, which he founded as an 18-year-old.

Local recognition has come Fogarty’s way since he began spreading his inspiring story, with a Sports Solihull Disabled Sportsman of the Year award, as well as the High Sheriff County award for Inspiring Others having been nominated by the Lord Mayor of Solihull.

And his services to young people were rewarded on a national scale when he was appointed an MBE in the New Year’s Honours list.

He continued: “You never know what’s round the corner, so it’s vitally important that while they’re still in the education programme, they do see the academic side of the apprenticeship through, because if they get released and no other clubs want to have a look at them, they’re going to have to fall back on that.

“I don’t know what’s going on with them personally but hopefully, after hearing my story, it hits home to them.”

That message was evidently ringing in the ears of first-year apprentice Jack Birch. The 17-year-old said: “It was quite sad listening to Charlie’s story, with the potential he had before the accident and I guess it just makes you aware that it could happen to anybody.

“It reinforces that you need to keep working hard at school because you don’t know what’s going to happen, whether you’re staying in football or having to look into getting another job.”

Defender Jake Walker echoed those thoughts. He added: “The thing I noticed was that he has a lot of hope. He’s in recovery, he’s struggling, but he’s got hope that he’ll get better and is determined to play football again.

“Charlie’s had his struggles and got back on his feet through his own determination, so if he can do it then we have no excuse to work just as hard.”