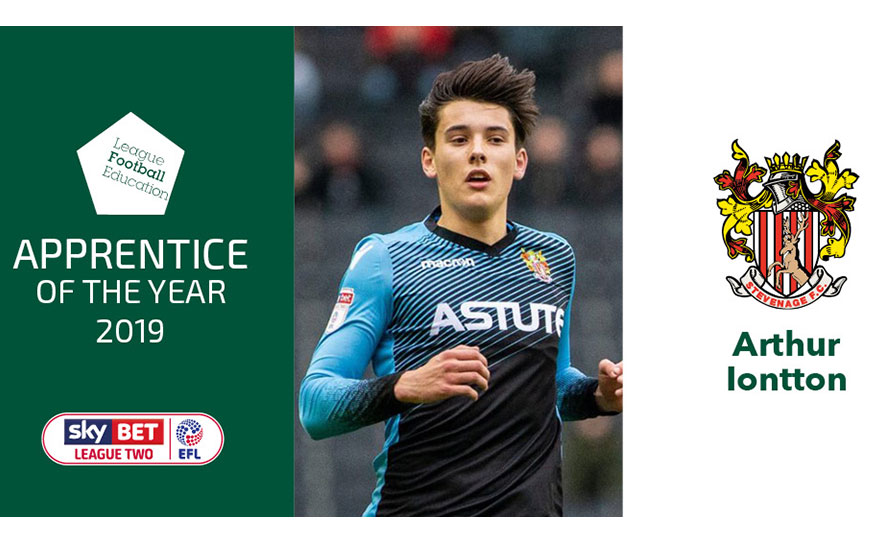 A year after Ben Wilmot claimed the League Two prize, Stevenage boast another winner in the form of Arthur Iontton, who has combined studying the Extended Diploma with consistent first-team action during his second year.

The Under-18s captain suffered a long-term injury last season, but handled the setback admirably before forcing his way into the senior side for the final two fixtures against Exeter City and Wycombe Wanderers, while he has enjoyed plenty of opportunities this term with 21 outings in total having signed a professional deal in July.

Despite being based full-time with the first-team and representing the club at various community events, the 18-year-old has hardly missed a session at college and has remained ahead of schedule with his coursework, working towards at least a triple Distinction standard.

Iontton’s success on and off the pitch encouraged Regional Officer Gavin Willacy to nominate him for LFE’s ‘The 11’ in October, referring to the fact that the midfielder has set an ‘excellent example to all other apprentices with his attitude and behaviour’.

“I’m very proud and honoured to have won it and very grateful for the opportunity that Stevenage have given me,” the teenager told LFE. “The gaffer and the chairman have put their trust in me, which I’m very grateful for. I’ve been able to get over 20 games this season, which is a fantastic achievement and one I’m very proud of.

“You can never take anything for granted in football. That’s why I’ve always made sure that my education is up to scratch. You need education because it helps you understand things – I’m learning about sports injuries and that can definitely help me in my career.”

Stevenage manager Dino Maamria said: “Arthur is now a fully established first-team member. Since I joined last March, Arthur was spoken of highly by the Academy. I gave him his league debut at the end of last year and his performance over pre-season left myself and the club no choice but to secure his services long term.”

Academy manager Robbie O’Keefe added: “Simply a pleasure to work with. Arthur has always been a talented young footballer but his grounded background never allowed him to get too high or too low. Arthur fully deserved to be recognised for his achievement.

“Arthur is the complete role model for anyone who has ambitions to be a footballer. He gives everything and always will. I honestly believe, having known Arthur since he joined the club as an Under-10, that because of his ability and application to his job, he will succeed in the long term.

“It’s an absolute joy to see him come all the way through. Arthur has always been a polite and well-mannered young man. He is now full-time with the first-team and I see no reason why he won’t go on to make many more appearances for this football club.”