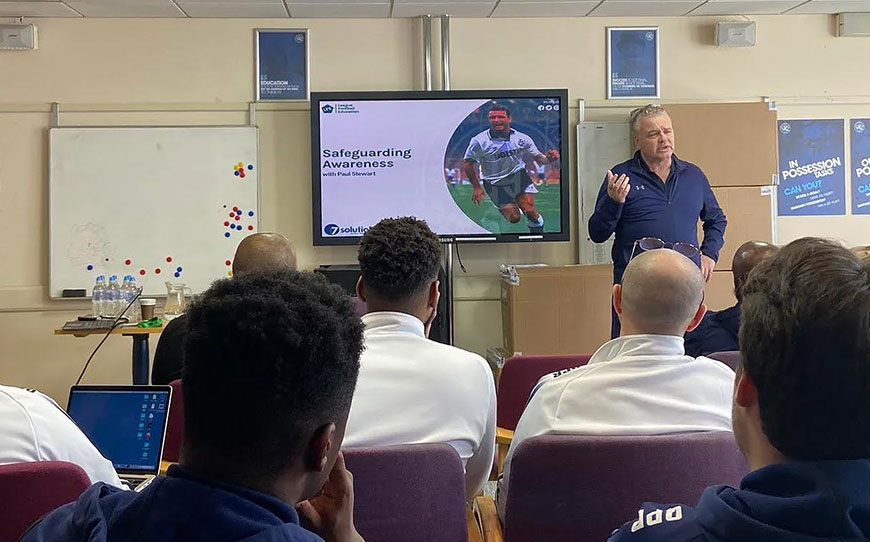 His journey through childhood to life as a professional footballer has been well-documented in the news, along with hundreds of other ex-footballers who have spoken out about the historical sexual abuse they faced as children.

“Since I came forward in 2016, I’ve always wanted to try and make a difference,” he told LFE. “People might say it was brave, but for me it was all about trying to make a difference and this work I believe is making a difference, because it is raising the awareness and educating the industry.

“When I look at my career, I didn’t enjoy it and so I try to say, ‘I want you to enjoy this experience and you can enjoy it by knowing if you have an issue, however big or small, there is a support network around you now and you can talk to someone.”

Stewart, who played over 500 games for the likes of Liverpool, Manchester City and Tottenham Hotspur, has undergone rigorous safeguarding training and is much more than an ex-footballer with a victim’s story. He is principled and adamant that this education is relevant to the people he is working with.

He said: “The game has changed and the sessions incorporate everything from today’s world. I don’t just talk about my experience; I talk about all forms of abuse within the sporting arena. I have to educate, as well as tell my own story, and so it covers social media, consent, isolation, banter, everything we have to be totally aware of to be safe.

“The academy players sit and listen and I get questions fired at me about what it was like at Liverpool and how it was for me when the abuse happened. If people are asking questions, people have taken notice.”

The 1991 FA Cup winner also works with the EFL and the NSPCC to provide training to Heads of Safeguarding and those in other roles, too.

“For the first time, we have CEOs, Directors and Board Members on the course to help them realise that safeguarding has got to be a priority in the club and it is heart-warming to see,” Stewart added. “We need to understand that you can’t cut corners on children’s safety. The fact that so many people are on these courses is massive.

“People are still talking to me about the sessions afterwards, so I can see this is making a difference. One club said that the next day, in the changing room, the staff spent an hour with the players discussing the session about how impactful and helpful it was.”

Earlier this year, The FA published the Sheldon Report, which investigated non-recent sexual abuse allegations in football. Paul is one of the survivors to support the industry in learning from what happened. He has also featured in a three-part BBC documentary called Football’s Darkest Secret and he recently appeared on mainstream news channels.