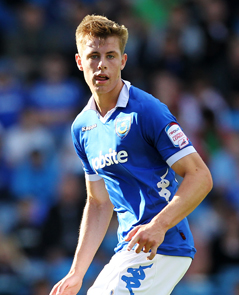 Congratulations to Adam Webster of Portsmouth who has picked up the first Apprentice of the Month Award of the 2012-13 season.

Adam has made excellent progress with both with his BTEC and NVQ, not an easy task given the fact that he trains and plays with the first team on a full time basis.

Adam has taken every opportunity to access the education work in his own time, working with BTEC staff and NVQ tutors to ensure he is achieving at the highest levels and is not falling behind.

His commitment to the education side of the Apprenticeship was confirmed when having arrived back from an away game at Colchester at 2.30am, he still made it to college at 8.00am to sit his lessons!

Adam has forced his way into the first team this season featuring in the match day squad for all seven of Portsmouth’s games in September.

He saw action in two of these, coming off the bench to set up a goal in the 3-0 win over Crawley and also playing the full 90 minutes of the 2-1 win over Scunthorpe. In addition he has been called into the England U19 squad, but due to commitments with the first team was unable to accept the invitation on this occasion.

“Adam is a conscientious, well liked member of the Academy. He is totally professional in all that he does and is an excellent role model for the younger players to follow.”

“Adam has made the journey through the Academy and has shown others that with hard work, application and determination you can succeed. He is a pleasure to work with.”