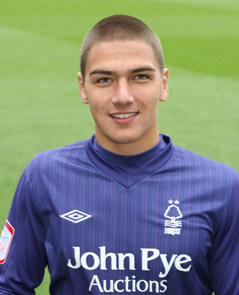 Congratulations to Dimitar Evtimov of Nottingham Forest who has been named as LFE’s Apprentice of the Month for October.

Educationally, Dimitar’s overall attitude and application is to be admired. Despite the initial language barrier, the young Bulgarian has excelled in the classroom and is currently working to a significantly higher standard than his target grade.

In training, Dimitar has been demonstrating excellent technical development which has led to him featuring on the first team bench on a number of occasions whilst fellow goalkeeper Karl Darlow has been out on loan.

He has also represented his country at various age groups, including playing the full 90 minutes in all 3 of his country’s qualifying games for last year’s European Under 19 Championships.

Away from the day to day life of an Apprentice, Dimitar is also involved in a number of club initiatives and regularly visits local schools promoting the Reds’ work in the community.

“I had no hesitation in recommending such a committed and likeable Apprentice as Dimitar for this award. He is a very strong recommendation indeed.”