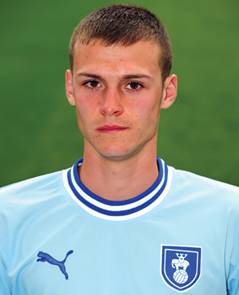 The 17-year-old striker has notched eight goals for the Sky Blues youth team this term and has replicated that form in the classroom by making excellent progress on his BTEC Diploma as well as passing the FA Level 2 Coaching in Football award.

This accolade comes at no surprise to Coventry City’s Education Officer Andy Ellis: “Billy is somebody who you know will just apply himself to whatever task you put infront of him whether that’s on the pitch or off it.”

“His effort thus far has helped him to fulfil his potential and he’s a great lad to have in the classroom because while he gets on with his work his is always one to help others as well,” he continued.

“He’s very independent and very determined to become a pro and he’s demonstrated his willingness to do what he needs to do to make that happen and not only that but he’s also become a good leader to the first year apprentices as well.”

“He goes about things in the right way and if you spoke to anybody else about him you would get the same response. It’s a thoroughly deserved award.”