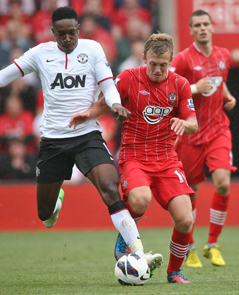 Southampton’s James Ward-Prowse has been named as LFE’s Apprentice of the Month for March 2013.

James has been a regular member of the first team squad throughout his duration as an apprentice. He has shown he is very self- motivated and hard working and is a fantastic role model for the younger Academy players. First capped by England at U17 level, James’ most recent international call-up was to captain the U19’s to a 1-0 win over Turkey last month.

He has completed all elements of the framework, putting in extra hours on his education to catch up due to first team commitments. Not only has he achieved highly in his BTEC but James has completed his NVQ to a high standard and proved to be a competent coach too.

“He has worked extremely hard to get his opportunity in the first team and to be playing regularly in the Premier League as a 17/18 year old is credit to his endeavour and application.”