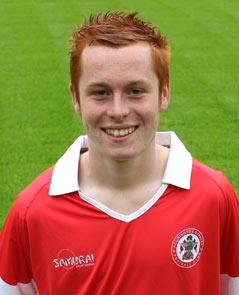 Accrington Stanley’s Ryan Hopper has been named as LFE’s Apprentice of the Month for March 2012.

Ryan has proved to be a model of consistency in the classroom, regularly producing work of a high standard. He has completed all aspects of his NVQ and Coaching qualification and is well on his way to achieving a Merit grade in his BTEC.

Ryan has demonstrated an excellent commitment to the practical football element of the programme and was rewarded for his efforts by being named as captain of the Youth Team.

Ryan’s impressive displays in both training and matches resulted in him being named in the First Team squad for the recent game against Dagenham & Redbridge on 24 March and three days later he went on to make his first team debut coming on as a 70th minute substitute against Oxford United.

“A first class example of how a young man should complete the Apprenticeship. Ryan is well received by all that he deals with including his peers and staff, both in the Youth Department and the First Team.”

“He continues to demonstrate his commitment, dedication and willingness to learn. He continues to lead by example and proves to be an ideal role model for the first years.”