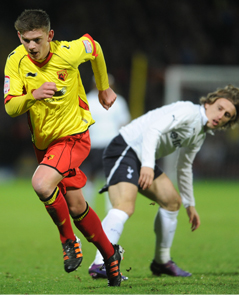 Sean Murray has been named as LFE’s Apprentice of the Month for January.

Due to first team commitments Sean has found attending College difficult however, he has shown a mature attitude towards his education and has just completed his NVQ.

Sean often takes his work home with him and uses what spare time he can find to keep up with deadlines.

Over the course of the month, Sean’s hard work and commitment in training has seen him break in to the first team squad, featuring against Tottenham Hotspur in the FA Cup and Millwall in the Championship.

Sean’s Youth Team Coach David Hughes was full of praise for the youngster;

“Sean has demonstrated an excellent attitude to improve his game and his hard work has been rewarded with selection in the first team.”

“It serves to emphasise the significance of not only having excellent ability, but also having the correct attitude which has seen Sean gain the rewards his hard work has deserved.”

“He is an excellent example for a young player trying to make a career for themselves. Everyone at the club is delighted for him!”