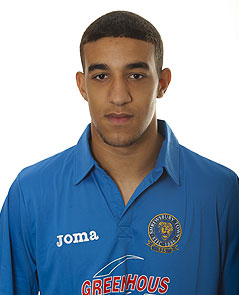 Congratulations go to Connor Goldson of Shrewsbury Town as January 2011 Apprentice of the Month.

Second year Apprentice Connor has been training with the first team all season and has enhanced his development by turning out in every Reserve team fixture this term.

His performances for the second string have not gone un-noticed and Graham Turner has obviously seen enough potential in him to warrant including him on the majority of team sheets for the 2010-11 campaign.

On the 8th February Connor was rewarded for his effort as he made a winning debut, coming off the bench in the 69th minute to replace Jermaine Grandison as the Shrews’ comfortably beat Lincoln 5-1.

Connor’s footballing responsibilities have resulted in him missing some valuable education time, however he has shown the same level of commitment off the pitch as he does on it by not allowing himself to fall behind and is on track to achieve a triple distinction in his BTEC National Diploma.

Add to this the fact that he has already completed his NVQ and Connor is well on his way to achieving the full framework.