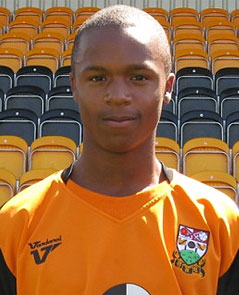 Congratulations go to Mauro Vilhete of Barnet as December 2010 Apprentice of the Month.

Mauro joined the Barnet first team back in October and has retained his place playing 14 games so far for the League Two side. Manager Mark Stimson has kept faith with Mauro despite Barnet having a difficult start to the season.

At the same time as excelling with his football, Mauro has made great strides with the rest of his Apprenticeship. He has almost completed his NVQ Logbook and is well on his way to completing the FA Coaching hours with a local junior team, Barnet Azzuri. PFA Coach Paul Davis, the former Arsenal star, said: “Mauro has shown a talent for coaching and has the potential to do really well.”

Mauro has improved his BTEC National Certificate grades this term, with course leader Stephanie Chittenden from Stanmore College reporting: “Mauro has really started off well this academic year. Even though he’s playing and travelling with the first team every week this hasn’t impacted on his commitments and motivation on his academic course.”

Barnet’s Regional Officer Gavin Willacy was delighted to nominate Mauro for the award.

“Mauro has improved beyond all recognition this season and he is a pleasure to work with. He’s also a fine example of what can be achieved at a community club like Barnet – he’s a local lad who lives around the corner from the ground, has come through the community scheme and is in the first team at 17. That’s a reflection of the excellent work done by the coaching staff at Barnet, the teachers at Stanmore and Mauro himself.”

A presentation will be made to Mauro at half time of the Southend United match at Underhill on 29th January by Barnet’s Head of Youth Development, Jeremy Steele.

Steele was delighted to hear the news of Mauro’s award:

“He really deserves this award. It’s not easy to balance academic studies and full time training at a professional football club. It takes a huge amount of commitment, dedication and no end of desire to want to achieve his ambitions.”

“The club, the staff and the fans are rightly proud of Mauro’s achievements and I get the feeling he’s not done yet.”