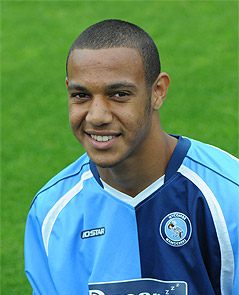 Congratulations go to Matthew Phillips of Wycombe Wanderers as the December 2008 Apprentice of the Month.

After his first team debut in April last year the fleet-footed winger has featured heavily in Peter Taylor’s plans so far this term and has recently pitched in with goal scoring contributions in both the FA Cup and League Two.

With 25 League and Cup appearances to date he has undoubtedly impressed on the field since signing a professional deal in the summer and he registered his first League goal in Wycombe’s away fixture at Aldershot Town on 6th December.

In the classroom Matthew is also making great strides on his education programme and has kept on top of his studies despite his first team commitments this season.

Pictured below is Club Chairman Ivor Beeks presenting Matthew with his Apprentice of the Month trophy.