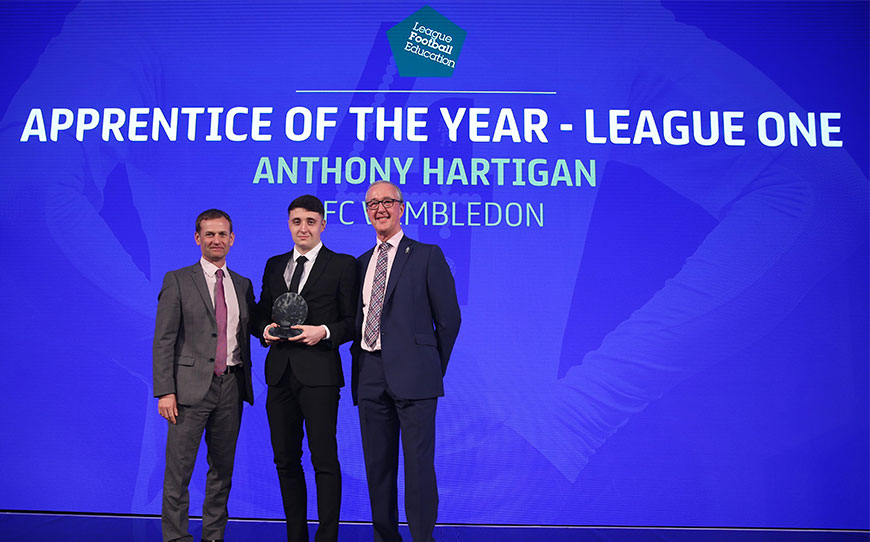 AFC Wimbledon may have endured a tough season fighting for survival in Sky Bet League One, but the emergence of second-year apprentice Anthony Hartigan has been a shining light.

The 18-year-old was introduced into the first-team in August in the first round of the Carabao Cup and was handed his Sky Bet League One debut 11 days later at Fleetwood Town.

A maiden senior goal in the Checkatrade Trophy capped off a sensational first month in the professional game for Hartigan and Dons manager Neal Ardley admitted it was evident from the off that the midfielder has the right mentality to succeed.

He said: “Young players today are different to young players when I came through the ranks. Society and football have changed. They get a lot more a lot earlier and they expect a lot more.

“Sometimes players don’t want to earn it and they have an opinion of where they are in the grand scheme of things that isn’t always the case, but with Anthony Hartigan the most refreshing thing about him is that he is not like that. He appreciates that he has to prove to be better than people already around the squad.

“He is always talking about the game and trying to be better at it. I find that really refreshing because it is so rare in young players today and people in football talk. In terms of mentality and desire, he has got it. Even people at other clubs say those players are rare these days. Anthony is one of those players and he thoroughly deserves the award.”

Hartigan, who has already penned two professional contracts since turning 17, has appeared in the first-team on 16 occasions in all competitions, including a brief cameo at Wembley Stadium in the FA Cup against Tottenham Hotspur in January.

And his success has not been limited to just on the pitch, with Academy manager highlighting Hartigan’s excellent application to the education side of the apprenticeship.

“Anthony’s a very humble person,” said Sauer. “He’s been a perfect student. He’s gone straight into the first-team and because he’s such a good footballer and such an unassuming character with strong focus, the first-team players and the management have really taken to him very quickly.

“What’s so pleasing with Anthony is that he’s put his education first. That allows us then as an academy to show that the two are associated and that you can’t do one without the other, so for that reason as a benchmark, he’s fantastic.”

Meanwhile, Hartigan added: “It’s great, I can’t really put into words how I feel. I’ve worked really hard this year both on and off the pitch and it is nice to get rewarded for all the hard work I’ve put in.

“There are so many people to thank. Obviously, the manager sticks out, but all of the first-team staff and the players have all helped me settle and feel really welcome.

“I’ve played a lot of games for someone my age. I’ve been put into pressure situations and that shows that the manager trusts me. I don’t think anyone expected me to do as well as I have done this season.

“I finished a lot of my college work two months ago. As part of our scholarship, we do a B-Tech Level 3 in Sport. This covers a lot of things, including how to prepare for games and how the body works. It all helps when you move up to first-team football. I still have to finish my NVQ, which is also included in the scholarship.

“Football does end at some point, even if you have a long career in the game. It would be good to have other ideas about what to do after the game. If I’m lucky enough to have a career in football, I still have to be prepared to do something else. You have to take yourself out of your comfort zone by expressing yourself and extending the knowledge you have.”