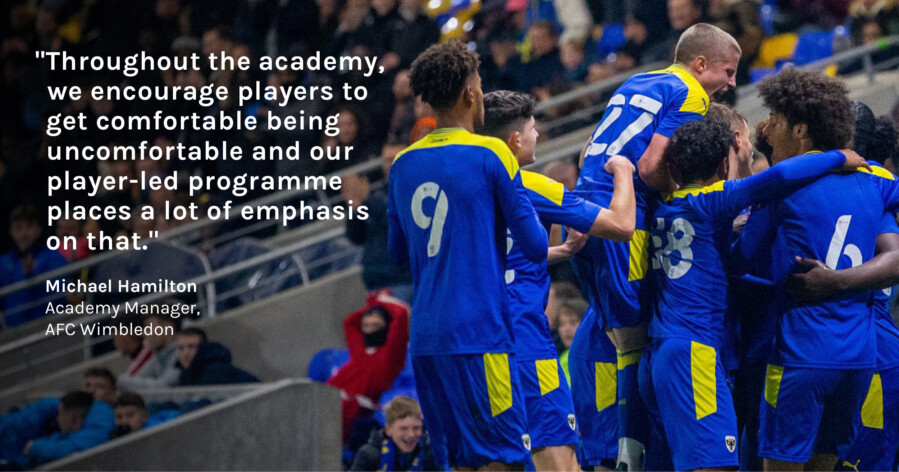 Last season, The Dons youth team defeated Rotherham United to lift the EFL Youth Alliance Cup. They have continued their dominance this season by winning the EFL Youth Alliance South East with three games remaining and matching an academy record for the highest ever win in the FA Youth Cup. There have been plenty of first-team opportunities handed out too, with the Papa John’s Trophy frequently utilised as a stage for youngsters to stake their claim for professional contracts.

Since the academy was formed in 2011, Robinson has played a pivotal role in helping Will Nightingale, Anthony Hartigan, Paul Osew, Jack Rudoni and Paul Kalambayi progress into the first team. All in all, over 378 league appearances have been made by AFC Wimbledon academy players in that time.

Now striving for more success, the Category Three academy is seeking new ways to develop players and the conception of the innovative player-led programme is evidence of their desire to take things to the next level.

But how has the programme been formed and what purpose does it serve?

“As an academy, we’ve always done stuff unconsciously, without it actually being structured or formulated into the programme,” Academy Manager Michael Hamilton tells LFE, “but regarding the actual player-led programme, the tipping point was Mark Robinson when he was the Under-18s manager.

“Mark came away from the Advanced Youth Award and began exploring different ways to give more ownership and responsibility to the players. One day he said, ‘I want to send the apprentices to a game with no coaches and I want them to lead it’.

“At first, of course, it could have gone either way. We didn’t know whether it was going to be a success or a failure. We had to map it out and make sure that we looked at all eventualities. And It’s worth noting that isn’t something we introduced overnight, we built up to where we are today over a period of time.

“The reaction has been brilliant. The players don’t get it right every time, but we are big on that, learning from mistakes and embracing the chaos. Throughout the academy, we encourage players to get comfortable being uncomfortable and our player-led programme places a lot of emphasis on that.”

Second-year apprentice Ben Mason has been wearing the armband this year and in turn, been given the added responsibility of organising his teammates during a player-led fixture. From organising pre-match analysis sessions to making substitutions during the game, having that extra weight on his shoulders hasn’t fazed the young full-back, who has recently spent time away with Ireland Under-19s.

“As captain and as a group, we enjoy the challenge of a player-led game. It’s definitely boosted our ownership and made us more accountable. I think, as well, it’s opened our eyes as to how good we can be without relying on a coach or a sports scientist,” Mason explains.

“We are very player-led anyway, so I think we have taken to it quite naturally. For example, I get in the morning and see the first-team coaching staff to see what they need for the day ahead, whether it be poles, the goals put in a certain place. We all have to chip in and manage the jobs around the training ground, and if something is wrong or one of us doesn’t do our job properly then we are held accountable.

“I think it’s a good environment to work in because it prepares you for the future. The teamwork side of it especially. The higher up you go, the less reliant you have to become on others. Doing this now, at this stage in our careers, can only help.”

Leading up to a self-managed game, the players are tasked with running their own team meetings and presentations and even plan their own training sessions on a Friday.

“We usually sit down before training to discuss the session and our shape, and then afterwards we do our set-pieces and opposition presentation,” Mason reveals.

“The injured players play a huge part on the matchday. Ultimately, they are the coaches. They will be the ones standing on the sidelines, greeting the referee and officials before the game, speaking to the opposition coaches and getting the changing rooms ready.”

There is one specific player-led game that stands out in Mason’s mind, not only because he scored two goals from right-back, but because of the mentality that he and his teammates showed to come back from a two-goal deficit to claim three points.

“I won’t forget the [Leyton] Orient game any time soon,” he says.

“The biggest challenge was actually in the morning. None of the coaches were in and the game was called off because of a waterlogged pitch. We did everything we could to get it on. We used the spikes at the bottom of poles and mannequins to stab holes into the pitch and drain the water. We brushed the water off with brushes from the cupboard. It took us about 45 minutes.

“Then in the actual game, we got off to a terrible start. Funnily enough, the day before, we had a meeting and talked through different scenarios. Just so that we could mentally prepare for any situation and think about how we would cope with it. Somebody wrote 2-0 down on the board and within 20 minutes, we were 2-0 down.

“We ended up coming back to win the game 4-2. It showed how high our standards are; to make changes, sacrifice certain players at half-time, change our formation, and fight back the way we did.

“I think that game just proved how good we can be when we take ownership, make our own decisions and stop relying on others.”

It is fair to say that lifting the Youth Alliance South East title is just reward for all the effort that the Dons have invested into the Academy programme in recent years, and for Robinson and his Academy staff, provides further evidence that the self-management exercises he introduced are producing the results he had once hoped for.