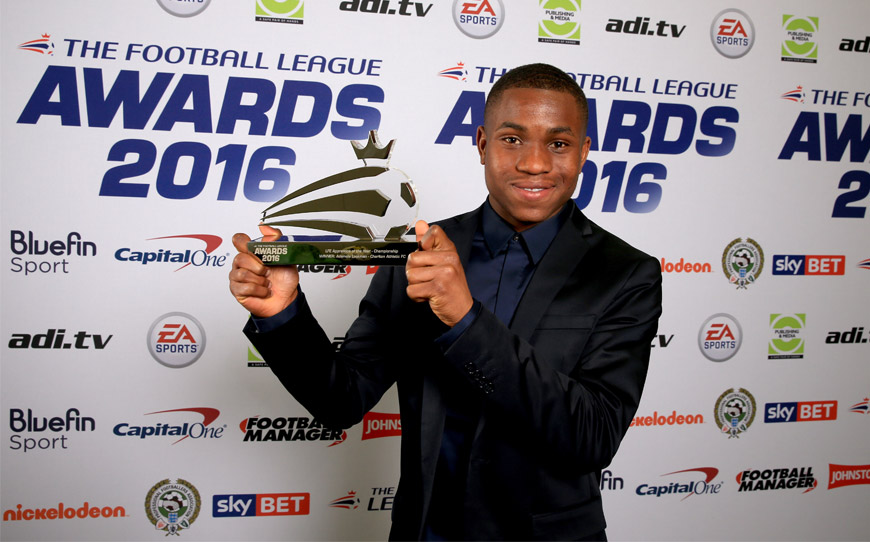 Charlton Athletic forward Ademola Lookman has been named the LFE Apprentice of the Year for the Championship at The Football League Awards 2016.

Lookman received the award at the gala ceremony at Manchester Central on Sunday evening in front of over 600 guests from clubs, sponsors and the football industry.

The Football League Awards 2016 was being hosted in Manchester for the first time, the same city in which The Football League was officially formed 128 years ago to the day. In its 11th year, the awards ceremony celebrates on and off pitch excellence across The League’s 72 clubs.

In an impressive breakthrough season the 18 year-old has been a shining light at The Valley after coming through the club’s academy. He made his debut for the first team in November 2015 and registered his first goal a month later. Lookman is seen as a role model for fellow youngsters at the club and his hard work and conscientiousness has received special praise.

On winning the award, Lookman said: “It means so much to me, I’m really proud of where I’ve come from to where I am now – it feels like a dream really.”

The award recognises the outstanding young apprentice at Championship clubs who excel both on and off the pitch.

Shaun Harvey, Chief Executive of The Football League, said: “During another action-packed Football League season it is important to acknowledge outstanding performances, both on and off the pitch.”

“We’re delighted to recognise this special group of nominees who have shown exceptional levels of talent, dedication and achievement. Congratulations to everyone who was nominated and particularly our winners, all of whom are deserving of their accolade.”