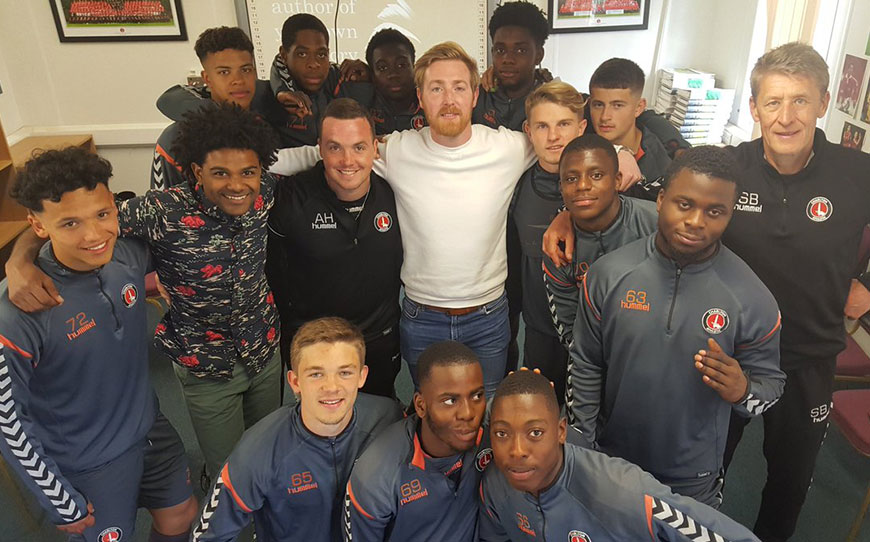 Charlton Athletic have piloted a pioneering approach to personal development after designing a two-year programme alongside League Football Education.

Joe Francis, Head of Academy Education & Welfare, said: “We’re always talking to the boys about trying to develop a conversation in your head when you’re playing that allows you to get over mistakes quickly.

“Yes, we’re approaching it slightly differently with these sessions, because the boys in their-day-to-day training will be stretched and tested. But that’s on the pitch, and that’s in training. With what we do, we step outside of the white lines, and try to engage with it from a different angle.

A young player’s journey to becoming a professional is never not a roller-coaster. There are peaks and troughs. We’re just trying to find ways of putting them in a trough and see how they cope.

“It’s been a vision of mine, to offer some sort of personal development programme for the young players of the club. We feel as though, as part of their working week, we can build in some sort of personal growth workshops. We feel this could benefit their performance both in training and in their day-to-day lives.”

Throughout the season, the young players have delved into numerous topics, including accountability, communication, confidence, identity, reputation and resilience, with sessions being presented in many ways.

While most have involved group discussions, there have also been outings away from the classroom, such as a visit to Middle Park Primary School in which the Under-18 apprentices shared their journeys so far to Year 4 pupils.

Former Premier League striker and current Under-23s Coach Jason Euell said: “This programme is giving me a reference point to use key words when motivating the players and reminding them about the culture and environment we need to create together.

“It’s always been a problem with young players in how they communicate. If they’re not speaking, how are they going to motivate themselves and the people next to them?

“The communication has gradually improved, in terms of how they speak to each other in the room, away from the club and on the pitch as well. I think it’s been a case of them realising what they actually want. We all know that they’re here because they want to be footballers, but it’s breaking that down to how are you going to do that?”

Other activities have included cooking, boxing and rock climbing, with the aim of testing the youngsters in a different environment and seeing if they are able to react positively and overcome different situations away from the football pitch.

Francis added: “The primary objective is to test the players’ resilience by putting them in unfamiliar and uncomfortable situations where there is some risk and see how they respond.”

This unique and ground-breaking work was even recognised by former Deputy Chairman of the Conservative Party James Cleverly, who oversaw a Player Care session in April.

And the development off the pitch has been matched by performances on it, with Lee Bowyer’s first-team earning promotion to the Sky Bet Championship via the Play-Offs following a 2-1 victory over Sunderland.

Six Academy graduates were involved in the successful league campaign, including first-year professional Albie Morgan, who emerged as an important contributor towards the ‘business end’ of the season and started both legs of the Play-Off semi-finals against Doncaster Rovers.

He said: “The longer the sessions went on, I came to the realisation that it really can help, more so as a person than a footballer. I was looking at the different aspects of the topics that we’ve covered and then taken that into my personal life.

“We had one session where people spoke about things that have happened in their lives. That really made me look at people differently and helped me to realise that I shouldn’t take anything for granted.”

Midfielder George Lapslie is another former Academy player to feature prominently this season having made 32 appearances in all competitions, leading to him scooping the club’s Young Player of the Year award. In addition to his first-team commitments and player care sessions, the 21-year-old has also been studying a Coaching for Performance in Football degree.

He told LFE: “It’s helping us with mental strength and we’re really taking responsibility for who we are and the actions we make. When you start sorting things out in your personal life then it’s easier to be focused on football because you’re not distracted by external things.

“I’m doing a course with Anglia Ruskin University online. I’m currently in my third year. I’ve got quite a lot of spare time, so I can balance between a bit of gaming and knuckling down with my uni work – I’m just on my dissertation now.

“I find it easy to apply it to myself as a footballer. The last subject I did was based on diet and some of the things I was learning I’ve never heard of before, so I’m really improving myself.

“A few of the lads said they don’t want to start studying a degree because they want to focus on football, but the work doesn’t take any focus off football for me. When you go home, you have a choice to make. You can learn about yourself and how you can better yourself whilst gaining a qualification, or you can play Fortnite.

“Gareth said that a lot of the boys have a procrastination attitude, where they put things off and not just with education, even with stuff like gym. I think I had that when I started my degree, but because I’ve had to keep on top of the work, I’ve had to come up with a method that works for me. Now I can focus much better and I’ve taken that into aspects of my football, as well as the degree.”

Elsewhere, ex-Barnsley apprentice Wilberforce Ocran believes the workshops have helped to speed up the process of him integrating with the rest of the team, having joined last summer following his release from Oakwell.

“I was able to speak in front of the whole group and say stuff that’s happened in my background and in my past and everyone listened and understood the things I’ve been through,” he said. “I’m not used to speaking out loud in front of the team, I’m used to being the guy in the corner by himself analysing things.

“It’s really helped because I’ve opened up to everyone and it’s given me more of a confidence boost to speak again.”

This feature is included in Issue 38 of LFE’s Touchline magazine.