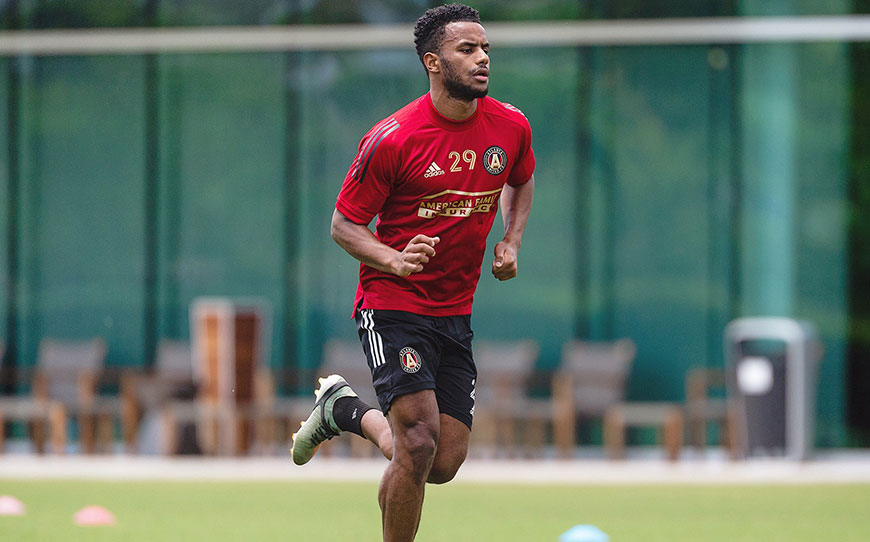 From being rejected by Derby County, to mixing with elite players in Major League Soccer, Mo Adams has overcome many obstacles to earn a career in football.

While Rams Academy products like Max Bird, Jayden Bogle, Jason Knight and Max Lowe have become established first-teamers at Pride Park, Adams was forced on a different path after being released by the club in 2015.

When a prospective move to Blackburn Rovers fell through due to injury, the tenacious midfielder turned his attention to the USA, pursuing a scholarship at the prestigious Syracuse University, which sparked his journey to the MLS.

“As an apprentice, you learn how to be disciplined and you mature as a person,” the 23-year-old told LFE. “You’re working within a competitive environment which requires resilience and mental toughness, so I was prepared to deal with any setbacks that came my way in America.

“I’m a firm believer that everything happens for a reason. Nothing worth having comes easy and I have the mindset to use adversity as motivation.

“I remember making a LinkedIn account and messaging over 200 coaches in England, from managers to assistants to scouts, and I didn’t get a single response. I then played in a showcase game for Vertex Soccer and received around 10 full scholarship offers to go to the States, so it was nice to feel wanted again.”

The Brit abroad thrived in his new life in New York, claiming numerous awards in the highly-regarded Atlantic Coast Conference, as well as being named Syracuse’s Rookie of the Year before donning the captain’s armband in his Sophomore season.

“When you come from England and you’ve been in an Academy, you get a bit of respect,” Adams said. “However, with that comes accountability and increased expectations. They invest a lot to give you a scholarship and the way to repay that faith was to be the best person, student and player I could be.

I came in as a Freshman with a chip on my shoulder and I think that mentality spread to other guys in the group. I wanted to set an example at all times, whether it be in training, in matches, in the classroom or just generally around campus.

“You become part of a family and I was proud to represent the Orange. People are dedicated fans and pay money to watch college sport. Even at our soccer games, we’d consistently play in front of around 4,000 supporters.

“A lot of our matches were nationally televised and nothing goes unnoticed because there is such extensive coverage. Every game counts. It’s very challenging and it motivates you to be competitive every day because there are rewards that will come with performing to a high standard.”

Adams’ success was not just restricted to his performance on the pitch, with his commitment to education resulting in an inclusion on the University’s Athletic Director Honor Roll, which recognises outstanding academic accomplishments.

“Over there, you’re a student first and an athlete second,” he continued. “Coming to the States gave me the chance to pursue my dream of becoming a professional player while also staying in education and having the University experience.

“As a student athlete, there is an understanding that it can be tough to balance your sport and studies, so you’re given the luxury of having as many tutors as you want, who can help you with your assignments.

“I spoke to my Head Coach, Ian McIntyre, about my academic goals and he regularly checked in on how my grades were. The coaches care just as much about your education as they do about your performance on the field because they care about you as a person, first and foremost.”

Despite only being halfway through his four-year course, the dream of a professional playing career became a reality in 2018 when Adams secured a Generation Adidas contract, which allows early entry for the MLS SuperDraft.

The importance of developing himself as a person came to the fore during the draft process, with player interviews holding as much significance as College highlights and Player Combine performance.

“It is like a job interview when you meet with the clubs beforehand,” said Adams. “The whole point of it is to find out who you are as a person, so you’ve got to be mature, well-rounded and have good communication skills.

“Those qualities also directly translate to being a better player, because you need to communicate clearly with your team-mates and have the confidence to perform under pressure when the spotlight is on you.

“I loved the whole draft experience and hearing my name called out for selection was an incredible moment.”

Having been a free agent with his leg in a cast just two years earlier, Adams was on his way to link up with World Cup winner Bastian Schweinsteiger, after Chicago Fire traded up to select him with the 10th pick.

He said: “Playing alongside one of the most decorated players in the world was a surreal experience. I remember the first time I saw him; I was pinching myself thinking it can’t be real. I was always paired up with him in passing drills or patterns of play, which was an amazing experience.

“I still speak to him now – he texts me every now and again to check how I’m doing. He’s an unbelievable player, but he’s an even better person and the advice and guidance that he has given me has been integral in my development since turning professional.

“I have a lot of fond memories of my time in Chicago. They gave me a lot of opportunities as a first-year player, which isn’t always the case. After my first few games, I’d already been tasked with marking Sebastian Giovinco and Ignacio Piatti, so I was thrown straight into the deep end, but thankfully I managed to rise to the occasion.”

Adams made an instant impact, scoring his first professional goal two minutes into his debut, while he has since made contributions in the MLS Cup play-offs and CONCACAF Champions League, as well as winning silverware in the Campeones Cup.

“I heard that a few clubs were potentially interested in making a trade for me and when I found out I’d be going to Atlanta, I was over the moon,” he added. “They were the reigning champions and it’s a fantastic club, with 70,000 fans at every home game and a great coach in Frank de Boer.

“Playing in the Champions League against the best clubs in North and Central America was an amazing experience. Having the opportunity to play in big games and big competitions is great and I’m determined to establish myself in a winning team.”

Adams has not forgotten his academic ambitions and has recently restarted his studies, with help from the MLS’ partnership with Southern New Hampshire University, which offers players a flexible online education.

“I made a commitment to complete the whole college experience and you have so much free time as a professional athlete. It’s important to use that time to get better as an individual and to also work on your future,” he said.

“I’m learning about Sports Management at the moment, but my long-term intention is to get into broadcasting. I’m planning to do a Masters degree in Digital Broadcasting and Journalism and I’m trying to get more involved in media work to build my connections and experience in the industry.

“I also like to read in my spare time. One of my favourite books is Kobe Bryant’s ‘Mamba Mentality’. I do the regular stuff like playing FIFA and watching Netflix as well, but I feel an hour of reading a day can be very beneficial, especially when you’re learning some wisdom from all-time greats.

“Coming to America has definitely been the best decision I’ve ever made. It’s given me the opportunity to become a professional athlete, pursue a degree and gain some amazing experiences along the way.

“I’d advise players to explore options abroad because if you put yourself in a bubble, you’ll never be able to grow. Be open to new opportunities and be willing to take risks. You could be one decision away from a totally different life.”