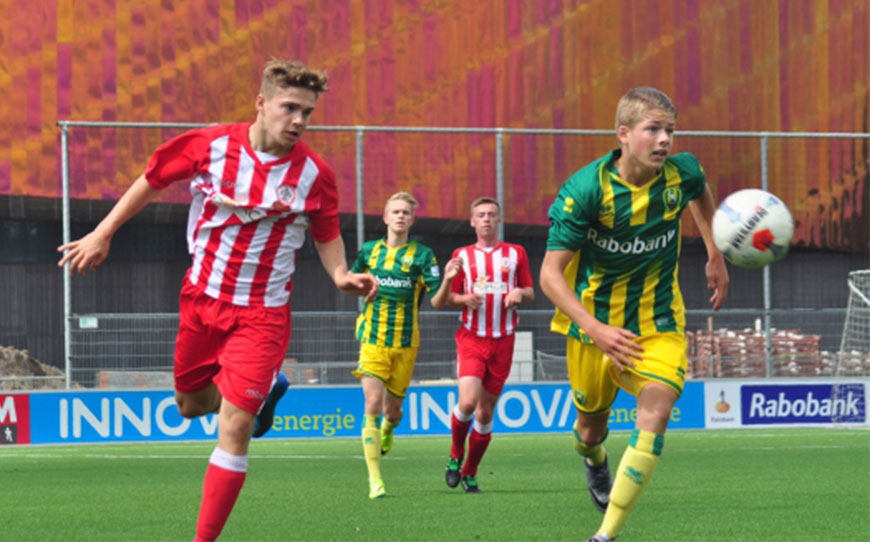 Accrington Stanley Under-18s began their tour of the Netherlands in perfect fashion by winning 2-1 against ADO Den Haag.

Striker Harry Blackburn had two goals disallowed and missed a penalty, but he finally managed to notch a goal in the second half to seal the win after Joe Rathbone had initially given Accy the lead with a penalty of his own.

The hosts made a flying start and could have been ahead early on as they created a handful of chances that tested the Stanley keeper.

But it was the tourists who had the ball in the back of the net first as Rathbone’s free kick was poked home by Blackburn, only to be ruled out by the offside flag.

Accrington were then awarded a dubious penalty as Blackburn was adjudged to have been fouled attempting an overhead kick, but his spot kick was well saved low to the keeper’s left.

The visitors continued to grow in the game and were again unlucky not to score when Jack Randall’s left-foot strike from distance crashed against the crossbar before Blackburn headed the rebound over with just the keeper to beat.

Stanley finally made their pressure pay before half-time when a long clearance set Blackburn away in behind the defence, with the striker taking the ball round the advancing keeper and being brought down for another penalty, although contact appeared to be outside the area.

Rathbone held his nerve from the spot, placing his effort high to the keeper’s left to give David Fitzgerald’s team a deserved lead.

After the break, Accrington almost extended their advantage after a terrific solo effort by the lively Blackburn, who barged through two defenders before seeing his effort thwarted by the keeper from a tight angle.

It was then the Dutch side’s turn to miss a glorious opportunity when a cutback from the right was blazed wide of the near post from six yards out.

A couple more chances went begging before another cutback was finally converted by Daan Hartemink to level the scores.

Stanley were on the attack again in a bid to steal a late winner and they should’ve done so when a shot was dragged wide across goal, despite Blackburn being open for a tap-in in the middle.

But the striker wasn’t to be denied as a low cross from the right rolled towards the run of Blackburn, who calmly slotted a left-foot shot from inside the area past the keeper to restore the lead.

Stanley and Blackburn had another goal chalked off after his finish was disallowed for offside, but it didn’t matter as the tourists held on for victory.