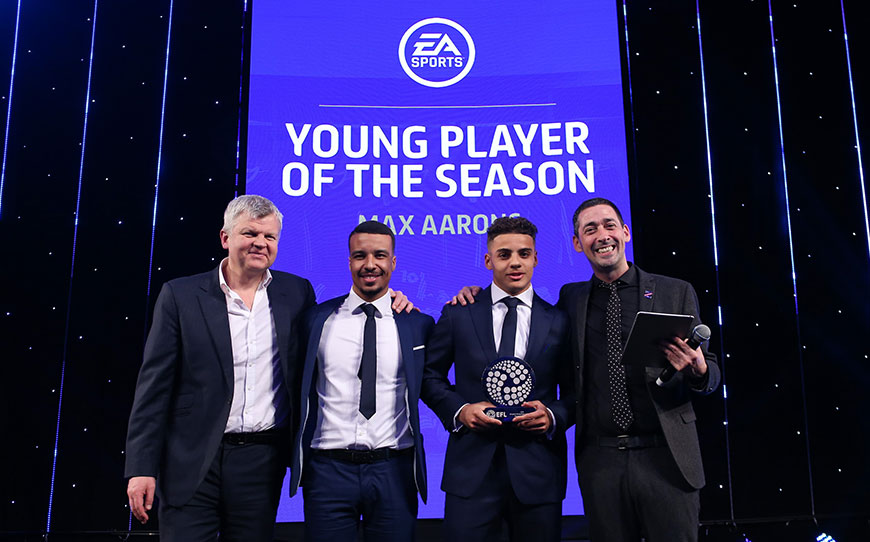 This time last year, Max Aarons was approaching the completion of his apprenticeship, had yet to sign his first professional contract and was still without a first-team appearance.

Twelve months on, the Norwich City starlet scooped the EA Sports Young Player of the Season award and was named in the EFL Team of the Season following a sensational breakthrough campaign for the Premier League-bound Canaries.

The highly-rated right-back rose to prominence in August after starring in the Carabao Cup, making his senior bow against Stevenage before scoring in a 3-1 victory at top-flight Cardiff City.

Aarons was then thrust into Sky Bet Championship action at the start of September, featuring against bitter rivals Ipswich Town before becoming almost ever-present in Daniel Farke’s high-flying line-up, while he has also earned international recognition with four caps for England Under-19s.

“It’s a great feeling, I couldn’t have expected this year,” he told LFE. “I’ve loved every minute of it and to get these accolades is brilliant.

“At this time last year I was still doing my education. To jump forward a year and be in this position is great. I couldn’t have pictured it 12 months ago, so that makes it an even better feeling.”

Despite only establishing himself at senior level as a first-year professional, the 19-year-old believes aspects of the apprenticeship, both on and off the pitch, have contributed to his success.

In addition to the variety of Life Skills sessions organised by LFE, Norwich also provide an extensive personal development programme for their academy players, including hospital and school visits, cooking lessons, serving and cleaning at community lunches at the local ‘SOUL Church’ and more.

“The way we’re taught from the younger age groups just sets you up for coming into the first-team,” Aarons said. “Doing some Life Skills classes and different workshops that were put on for us was a massive help.

“It all adds to you as an individual, it makes you more of a well-rounded person. Doing the community stuff and working on the education side of things, it makes the aim not just about football and shows you can do something else, so I’d definitely say it’s helped me massively as a person.

“Helping the community is the pinnacle of what you can do as a footballer because you’re in a position where you can do that and affect people’s lives, so I think that has helped me as well.

“Doing more media duties and stuff like that gets you prepared for different situations. It’s what builds you up to being in this position and being able to deal with it. I’m thankful for being given that opportunity while I was an apprentice.”