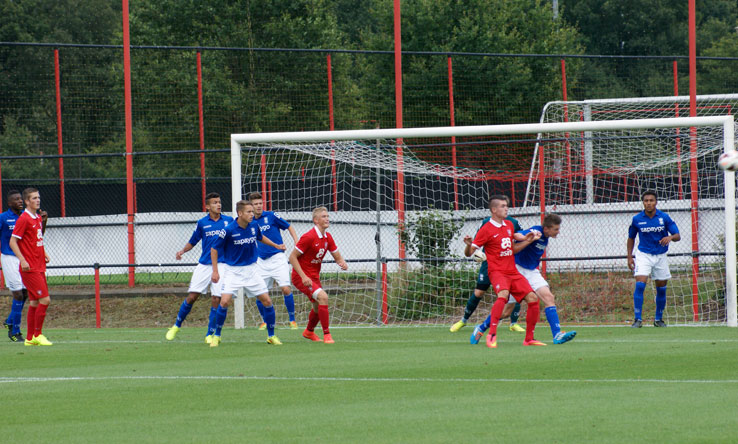 We started the day on Tuesday with a slight lie in by normal standards. Nine thirty breakfast gave the lads an opportunity to get an extra hour shut eye.

A session in the morning preceded the afternoons match, and gave an opportunity for the coaches to implement any final details to help the lads through their match later on that day. After training, preparation was the priority with a portion of the group going into the swimming pool for final bits of recovery.

The game against Twente was next. After the merciless defeat at the unforgiving hands of PSV, vengeance was the ambition.

Upon arriving at their training ground, the quality of their pitches was instantaneously apparent. The carpet of a pitch only wetted the appetite of the team, suiting our technical, passing game.

The match started with a real tempo, both teams flexing their attacking muscles, both showing their prowess. Both sides came close, chances coming at both ends, with only neat goalkeeping maintaining the deadlock.

Unfortunately, rather against the run of play, an FC Twente counter attack blitzed through the previously solid Birmingham back line, to score the opener. Even the exceptionally long legs of centre-back, Wesley Harding, couldn’t keep it out, despite his courageous efforts.

After the goal, a Birmingham barrage began, with a series of chances going close. An unstoppable run from Khaellem Bailey finally forced open the defensive walls, drawing a foul from a defender in the oppositions box. He went on to convert from the spot, calmly and competently, to equal the scores just before half time.

A positive first half, seemed to be let down by a slow start to the second. Pinned back in their half by FC Twente for considerable periods of time, the team was required to absorb large amounts of pressure, something, admittedly, suited better by other teams.

However, stand strong they did, maintaining the score line. As in every match, momentum swung, and Birmingham remained dominant for the remainder of the second half. It was Khaellem Bailey, who’s power and pace deemed too much for the retreating opposition defenders again, and they had little choice to bring him down for another penalty.

This time, unfortunately, he could not convert the penalty himself, with the goalkeeper making a sprawling save to his left. Seemingly unfazed by the miss, Birmingham continued to press forward on the offensive. Three guilt edge chances fell to Birmingham strikers in the last few minutes, none of which could be converted.

The game ended with a 1-1 score line, but with entertainment value of a much higher scoring game. The lads were definitely deserving of greater reward but, on the day, it wasn’t to be. Invaluable preparation had been gleamed from the two games vs Dutch opposition, leaving the group confident of the prospect of an all English final on Friday.

Once back at the hotel, the team had a relaxing evening, most exhausted from their considerable efforts earlier.

Wednesday was scheduled as a rest day, following the match vs FC Twente on the Tuesday. Stretching and a pool session awaited the starting eleven, with the remainder of the group being involved in a game of head tennis on the courts.

The pool session was relatively uneventful, the same could not be said of the head tennis. With a super competitive group of male adolescents, these events can always become more than the steady run out intended.

With the match tied, one game each, the final game was nicely poised at 15-20. From here, a comeback was mounted, bringing the game back even. With tempers flaring and heads rapidly disappearing, each side battled for a victory of two clear points.

A running narrative was projected from the umpires high chair, with Steve Spooner offering a play by play analysis. “Cheaper than poundland,” was probably my favourite comment, used to describe an especially dire shot. The game eventually finished 24-22 with the losers being subject to their opposite number, and having to serve them lunch afterwards.

A bike ride took up the afternoon. With everything going too well, the group was lulled into a false sense of security. This was obviously and inevitably broken, when the main of the group took a “gamble” on the return to the hotel. A wrong turning left them stranded, putting an end to the fantasies of an uneventful group activity.

Thankfully, it wasn’t long until the desired route was fallen upon and the hotel was duly returned to. That was it for the days organised proceedings, with the group choosing to take advantage of the hotels leisure amenities.