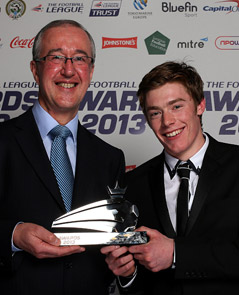 Hartlepool United’s Luke James has been named the LFE Apprentice of the Year for League One at the Football League Awards 2013.

James received the award at the gala ceremony at The Brewery, London, on Sunday evening in front of over 600 guests from clubs, sponsors and the football industry. This year there were a total of 17 awards with 34 clubs shortlisted for honours.

Since joining Hartlepool United at the age of 11, Luke has exceeded all expectations and played regularly for the youth team. His level of performance was rewarded with a professional contract three months into his first year of being a apprentice.

Making his debut in December 2011, Luke became the youngest ever player to represent the club, also going on to become the club’s youngest ever scorer with his volley against Rochdale in January 2012. He progressed to play many more games for the first team in the 2011-12 season, and was rewarded with a contract extension in the summer.

On winning his award, James said:

“It is absolutely fantastic to get this award, it is a great feeling. It has been really hard work with studying and training but it is worth it.”

“You have to sacrifice everything to be a professional and I just want to stay in school and progress my career.”

When assessing the category, judges looked at the playing record of the apprentice’s educational attainment, disciplinary record and other outstanding achievements. Players eligible for this award are those in the second year of their apprenticeship (i.e. in his ‘under-18’ year and registered as either a second year scholar or as a first year professional).

Greg Clarke, Chairman of The Football League, said: “The Football League Awards 2013 has given us another opportunity to celebrate success at League clubs both on and off the pitch. It gives us the chance to reward those who have achieved fantastic results throughout the year. I would like to congratulate tonight’s winners and all those who were nominated.”