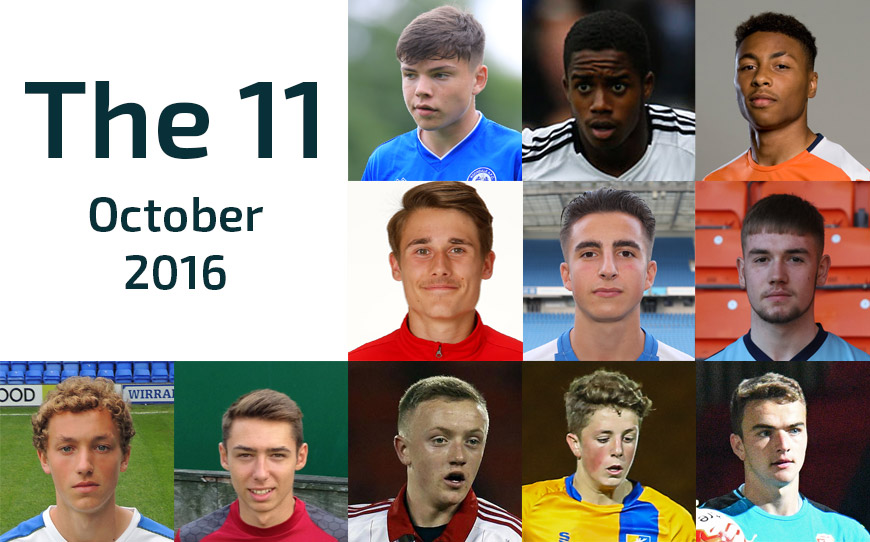 LFE takes a closer look at the players to make ‘The 11’ in October 2016 and why they’ve been included:

First year apprentice Dylan has made a fine start to the season and leads by example in all areas.
Hailing from Davyhulme, Manchester, five minutes from Old Trafford, Dylan has started the new campaign on fire hitting half a dozen goals to help Blackpool into the upper reaches of the North West Youth Alliance.

LFE regional officer Simon Williams said: “Dylan lives in digs but has settled really quickly both into the club and full-time football. He’s done well on the pitch and already trained with the first team but he’s also bought into everything we and the club have asked for off it, as well. He’s shown a mature attitude and is looking to push himself academically.”

Danny is a model apprentice who takes pride in everything he does. He has shown a meticulous approach and taken feedback from, support, medical, coaching and sports science staff on board to enhance his development.

A local lad, Danny is living the dream by playing for the club he supported as a boy. A year on from being asked to earn a scholarship, he is captaining the Under-18 team!

Danny’s determination to do the best he can has also transferred into his academic studies where he has worked tirelessly to catch up on the NVQ and BTEC. He embodies the ethos of achievement through hard work and tenacity.

A quiet yet mature young man Harry’s effort and application are to be commended. He remains a fixture in Alex’s U23 and U18 sides and is now training with the first team on a regular basis.

A technically adept and versatile young player Harry can operate in a number of positions and has featured on the right wing, in centre midfield and at full back already this term.

Educationally, he is on track to complete his Level 3 Diploma in Sport Performance and Excellence by the end of the season and has displayed a fantastic work ethic and attitude to go above and beyond.

Harry is a popular member of the group who has been an inspiration to some by demonstrating a willingness to stick at his work even when he finds it challenging.

Teenage sensation, Ryan hit the headlines in August when he became the first player born in the year 2000 to score in the Championship, three minutes after coming on against Cardiff.

It was a week before the 16-year-old, who has represented England at youth level collected his GCSE results. Understandably the Premier League big boys are already circling Craven Cottage with Tottenham, Liverpool and Manchester United all reportedly vying for his signature.

LFE’s regional officer Ian Smithson said: “Ryan is playing regularly with the first team and England. He is very committed and driven, and his academic work is up to date despite his extensive footballing commitments.”

The O’s Under-18 skipper Charley Barker has received Gavin Willacy’s nomination in the South East.
Willacy said: “Charley has made a good start to the new season and is well on track to complete his apprenticeship with good academic grades. On the pitch he continues to lead and set an example for others to follow.”

Akin had an outstanding start to the season, making his first team debut when he came on as substitute against Newport County. He followed that up with appearances against Gillingham and impressed at Hartlepool, on his first league start.

Famewo has impressed enough to already have earned a professional deal and his all-round effort and attitude to his apprenticeship is exemplary: he is doing the Extended Diploma at Central Beds College despite his first team commitments and is on course for a very high grade.

Teenage winger Tom gets the nod from our man in the Midlands Ian King after making his debut in Mansfield’s Checkatrade Trophy tie against Port Vale and his excellent efforts in the classroom.

“Tom’s the ideal candidate for The 11,” said King.

“He’s putting as much as he can into his education programme and is on target to complete his BTEC Level 3 Diploma at Distinction level. He also looks to have a bright future in front of him after impressing on his first team debut.”

Still only 16, Aaron made his Rochdale debut in their Checkatrade Trophy clash against Notts County earlier this month and followed that up by starting in Dale’s 3-0 victory over Southend in League One four days later.
Morley who only left school in June has already caught the eye of first team manager Keith Hill who said:

??“Age isn’t a concern for me. It’s the ability and the process of putting that ability into performances, and I think Aaron can do that.

“His passing is as good as you’re going to get at any level, not just this level. It’s like slo-mo time when he gets the ball, but trust me, the processes he goes through are very, very quick and are in timing with the Premier League, so if he adds to that then there could be a talent there for the football club.”

Attacking midfielder Jordan made a name for himself last term smashing 25 goals from midfield as the Blades finished runners-up in the PDL U18 competition.

And he has started this campaign where he left off with 8 goals in 10 starts, including 2 for the U23 team. Now a regular in the U23s, he committed his future to the Blades by recently signing his first professional contract but has shown the nous to also concentrate on his academic work.

Currently on course for triple Distinction grades on his BTEC qualification, Jordan’s commitment and efforts have been exemplary and his work in supporting the clubs’ community programme has also not gone unnoticed.

Will has already signed a professional contract after making his first team bow at the end of last season. He has shown himself to be focused, confident and articulate within the first team environment and has a non-stop work ethic.

Educationally he has shown the ambition to maintain his excellent progress of working above his target grade and has been proactive, so far, in keeping up to date with his work.

Defender Eddie has been hovering around the Rovers first team squad for months but while he may still waiting to make his bow in the ultra-competitive National League, he is well on track to achieve on and off the pitch.

Claire Wilberforce-Marsh LFE’s regional officer said: “Eddie is doing well on the educational elements of his apprenticeship and is very close to making his first team debut. He’s an amazing young man that is working so hard both on and off the pitch to achieve his goals.” 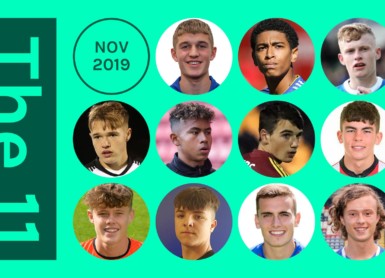 LFE takes a closer look at the players to make ‘The 11’ in November 2019 and why they’ve been included:..

We use cookies to ensure that we give you the best experience on our website. If you continue to use this site we will assume that you are happy with it.OkPrivacy policy